Export version dubbed in Hong Kong by Axis International.
The dubbed audio was formerly available on Region 1 (U.S.) DVD from Tokyo Shock, released in 2006.
The dubbed version of this film, as "Atragon," was noted in Toho Films 1968. 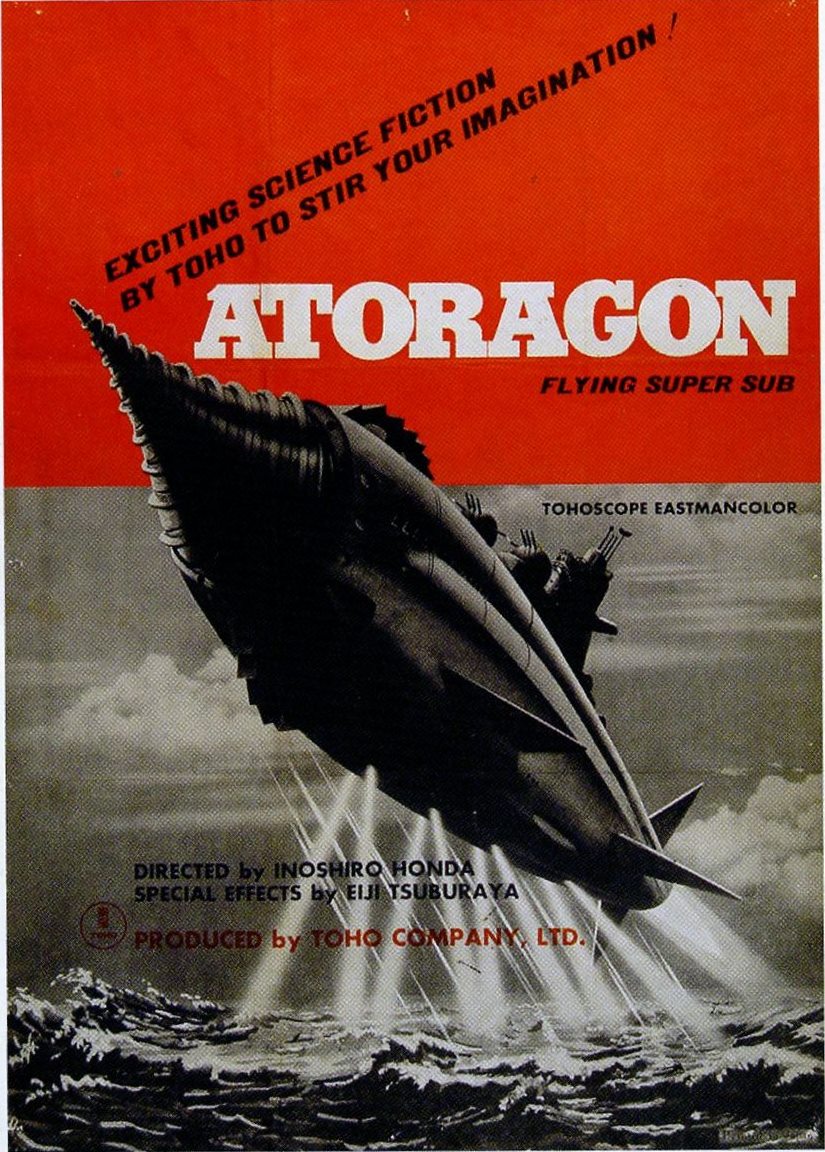 In Atoragon, Ted Thomas' distinctive voice can't be missed coming from the mouth of Admiral Jinguji (played by Jun Tazaki) and several auxiliary characters. Unfortunately, the identities of many other Hong Kong voice actors are shrouded in obscurity; this is especially true for the performers who worked with Thomas in the Sixties. The only other identified English voice actors in the film are Nick Kendall (dubbing Tadao Takashima) and John Wallace (… Ken Uehara). Like Thomas, both were presenters for Radio Hong Kong.

The actor dubbing Yu Fujiki's character can be heard in four more of Axis' dubs for Toho, usually as a leading man—for example, he dubbed Akira Kubo’s part in Matango. Another familiar-yet-unidentified voice in Atoragon belongs to the actress dubbing the Mu Empress (Tetsuko Kobayashi). This performer continued in film dubbing in Hong Kong into the Eighties, along the way voicing leads in films such as Gamera vs. Barugon (Daiei, 1966), The One-Armed Swordsman (Shaw Brothers, 1967), and Goké, Body Snatcher from Hell (Shochiku, 1968). Some of her most memorable performances in Toho films are as Machiko Shima (Tomoko Umeda) in Godzilla vs. Gigan, Mariko Nishiyama (Kaoru Yumi) in Prophecies of Nostradamus, and Katsura Mafune (Tomoko Ai) in Terror of Mechagodzilla.

The Red Satan sequence represents something of an oddity among Toho's export versions. In the original Japanese version of the film, the characters onboard Red Satan are supposed to be U.S. Navy personnel and the actors speak English accordingly. In the export version, at least as released on DVD by Tokyo Shock, none of these performers have been dubbed. Although it seems reasonable to keep English-speaking performers undubbed (no matter how good or bad their performances), this was apparently not usually the case in Toho’s export versions.

Initial English language publicity from Toho used the title Atoragon and gave the subtitle "Flying Super Sub." Despite this, "Atoragon" is uttered only once in the export version. (The voice actor doesn't seem sure of the pronunciation, voicing approximately "Air-tair-uh-gon.") Confusingly, this same English version also has Jinguji introduce the submarine as "Gotengo," an English approximation of the craft's Japanese name (轟天号 Gōten-gō); this name, too, is spoken just once. Beyond these two instances, the dubbing script goes to great lengths to avoid naming the craft at all. Around the time the film was released, Toho issued a ten-page publicity book containing English, French, and Spanish synopses of the film; of these, only the French synopsis defines Atoragon as the craft's name. Allegedly, "Atoragon" was originally intended to refer to Manda, the serpent which engages Jinguji's submarine in a memorable climactic sequence. Atoragon therefore is supposedly shortened from the Japanese pronunciation of "Atlantis Dragon." I'm unsure of the origin of this theory, although I suspect it's merely fan speculation.

The "List of English Dubbed Pictures" in 1968's volume of Toho Films uses the title Atragon. This spelling appears to have originated at American International Pictures, which released its own English-dubbed version of the film in the United States in December 1964. In this version, with dialogue re-dubbed by New York's Titra Sound Studios, characters consistently and frequently refer to the super-sub as "Atragon." AIP's Atragon has been seldom-seen since the 1980s and today is more obscure than Toho’s own English version, but its revised name is still commonly used for all versions of the film and its iconic vehicle.

As Atragon, the film made its American home media debut in 2006, released by DVD distributor Media Blasters' Tokyo Shock label. Stereo and 5.1-channel surround mixes of Axis International's dubbed soundtrack were among the audio options on the disc. The export version's English visuals (including titles and credits) unfortunately were not included, and it's not known if those visual elements have ever been seen on any video release of the film.