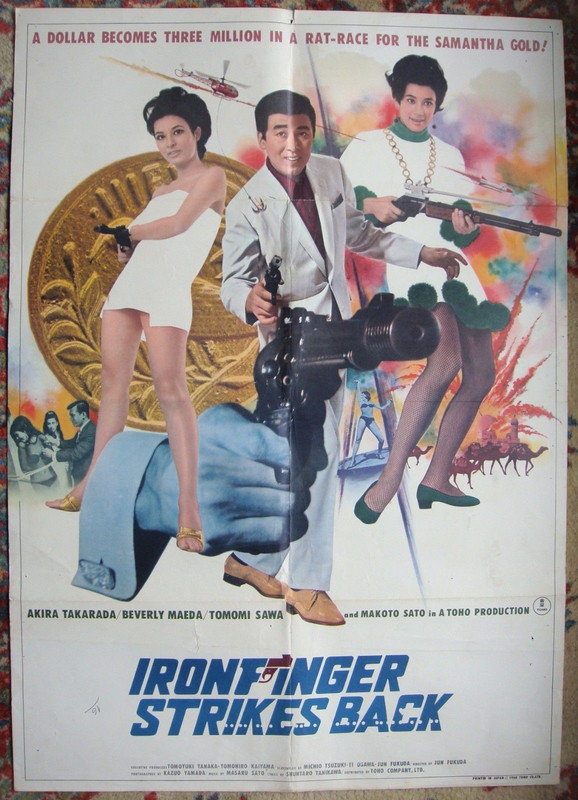 Although the dubbed version is apparently unavailable, Toho's export trailer is, and it's definitely the work of Tokyo's Frontier Enterprises. In said trailer, stars Akira Takarada and Makoto Sato are dubbed by Burr Middleton and William Ross, respectively. The role played on screen by Andrew Hughes sounds like it was dubbed by Bud Widom, although I can't be certain from the one line of dialogue. If Frontier also dubbed the full-length feature, there's no guarantee that these actors essayed the same roles as in the trailer.

Some English export materials use the alternate title Ironfinger Strikes Back. The purpose of the different titles might have been to allow foreign distributors a choice to tie the film into Ironfinger (in markets where that film played) or to issue this sequel as a standalone film (in markets where the earlier film was unreleased). In this scenario, it's possible that posters were printed with either title, although it seems that only the "Ironfinger Strikes Back" version has ever turned up online (pictured at right). But because "Booted Babe, Busted Boss" is the title used in both Toho Films and UniJapan, it may just be that "Ironfinger Strikes Back" was a later re-titling.

UniJapan notes that Spanish-subtitled prints of the English-dubbed version were also available for licensing. Archived ads at Newspapers.com confirm that a Spanish-subtitled print was screened in Miami in November, 1975, as Ironfinger Strikes Back, which appears to be the only release of the dubbed version in the United States. The original Japanese-language versions of this film and its predecessor have both been licensed by Janus Films, however, and appear on the Criterion Channel streaming platform. Janus' title is "Golden Eyes," but I haven't found any evidence that this title was used by Toho International, Co. prior to the Criterion release.